Last year the story went around the world: Banco de México (Banxico) refused to reveal in what country its reserves of gold were stored. Mexico was on the world stage as regards gold, after it purchased 93 tonnes, and rose in the global ranking of gold reserves calculated by the World Gold Council.
Today, thanks to the Federal Transparency Law, Banxico has become perhaps the first central bank to reveal in writing the amounts of its gold holdings as well as the names of its custodians and the locations where it s gold holdings are supposedly held.
It was quite difficult to obtain this information, for the Bank refused again and again to hand over the information until compelled to do so by a ruling of its own “Department of Management for Rules Control”, which is the entity in charge of dealing with appeals presented as “Appeals for Revision”.
The wrangling went on for four months, during which Banxico insisted that it was necessary to classify as “Reserved” all information refering to its gold position; it claimed that revelations might “harm the financial, economic or monetary stability of the country”.
Once the four cases were resolved favorably, the Liaison Unit of the central bank notified this journalist  through the following documents: REF.: 22.25.2012, I22.27.2012, I22.28.2012 y REF.:I22.29.2012, as follows:
The distribution would be: in England ˃94.23%; México, 4.82%; United States ˂1% Voilá.
Though the figures refer to past April, they are still current.
This is so, because from then up to the present, Banxico’s gold has remained almost unchanged, but also because in its last communiqué it has advised that it is not thinking of moving its gold bars: “The Bank of England is one of the world’s most important custodiansof gold, for which reason maintaining our gold position with this institution minimizes the costs of storage and transfer of gold.” [Our emphasis]
Besides all this, what is worrisome is that Banxico believes that its gold is safely stored because it is in the hands of the famous Bank of England (BofE). Yes, London is, along with the New York Fed, one of the principal depositaries of the gold of the majority of central banks, but that is no consolation.
We find one of the reasons for concern in an analysis presented some days ago by the world expert on precious metals, Eric Sprott, “Do Western Central Banks HaveAny Gold Left?”  in which he points out that given the increase in physical demand for the metal observed during the past decade, it is not possible to identify the source of all the supply of gold to satisfy that demand; Sprott points to the central banks who, by means of legal accounting  shenanigans, are supplying it without having to report it on their balance sheets…but they are in fact, emptying their vaults. Is Banxico’s gold really at BofE? 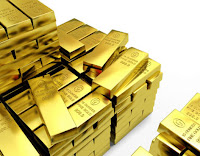 But let us go further. As in 2011, Banxico once again answers that “it is not possible to specify with certainty the number of bars purchased”(sic). This leaves the door open to only two possibilities: either Banxico is a client of the so-called “Bullion Banks” (banks who specialize in precious metals) or it has a direct arrangement with BofE.
The first case is the more likely, for Banxico’s ignorance regarding the number of bars purchased, plus the references made last year to the London Bullion Marketing Association (LBMA) and its revelation that BofE is the custodian, leads us to think that it is the holder of an Unallocated Account, or paper gold, whicaccount only gives the holder a simple “general right” to the metal but not the ownership of specific bars. It is the “Bullion Banks” who handle this type of account and not the BofE.
We must remember that the Bullion Banks operate under a system of fractional reserve, which in essence allows them to sell or loan out several times one same lot of metal, leading many other investors to think that they are legitimate owners of our gold. This abundant “supply” has of course played a fundamental role in the suppression (manipulation) of the price of gold for years.
Now, let us suppose Banxico to be in the second case, with a direct arrangement with BofE.  Such a situation would be quite scandalous, and we say this because at least officially, the BofE is supposed to provide only the service of administration on an allocated basis, that is to say, on individual bars with stamped serial numbers and stamped certifications of purity and weight . Why does Banxico not have this information, in such a way that it can state exactly how many bars of gold it purchased?
In any case, based on the information which it has twice given us, in which it states that it does not know how many bars of gold it purchased outside the country, Banxico is in fact the owner of only 100% paper gold, and not physical gold.
This means Banxico is trusting the corrupt system of fractional reserves; in a massive run where all are rushing to take possession of their physical gold, that system will not be able to deliver Banxico’s reserves. Not for nothing has Hugo Chavez, recently re-elected president of Venezuela, repatriated the majority of the Venezuelan gold reserves to his country.
To state the matter clearly: the problem is that more gold has been sold in the world than can be delivered, and that means we are running a very high risk.
In the field of investment in precious metals property is defined by physical possession, for one reason: not having it, the creditor is exposed to the depositor’s default, who may have loaned or even sold the metal, as we have explained.
Therefore, the majority of Mexico’s reserves in gold should immediately be brought home, leaving outside the country only a minimum for operations which may be required in the future. Otherwise the gold will not fulfil its function of acting as a shield against external shocks in times of crisis.
We cannot fail to mention that in the face of a crisis in the global monetary system such as is now evolving, there are those, especially in Asia, who are acting correctly in the precious metals game: they are purchasing and taking physical delivery.

This is fundamental, for the central banks and the most powerful governments on the planet are caught up in a devastating and unstoppable race of monetary printing (as QE3 of the Fed) and public deficits to “stimulate” their economies just as the tide of debt is up to their ears.
The final outcome of this cannot be other than disaster, and then the whole world will be seen chasing after gold that will not be there for all claimants.
In this light, it is clear that the reasons we have presented are more than sufficient to worry Agustin Carstens, Governor of Banxico, when he thinks about a gold which, until it is in our vaults, will not be more than a pretty but unreal golden dream.
Follow me on Twitter: @memobarba